– Garbage does not exist – 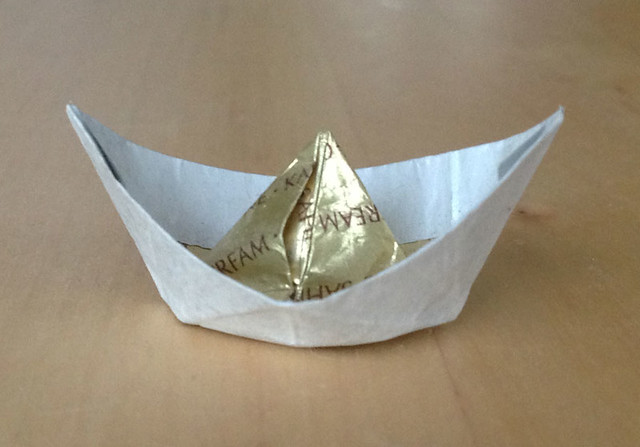 Our current obsession is constructing paper boats from old magazines and cardboard boxes which can actually float.
It all started on a cold and rainy January day in a remote part of France. It had been raining for days and the whole area was flooded. Confined indoors with nothing but a stack of old magazines, we decided to fold an armada of paper boats and set them asail in the drowned land. But with the first boat we released, we longed to sail away ourselves. So while we watched our little armada float away, the idea formed to build a life-sized paper boat. 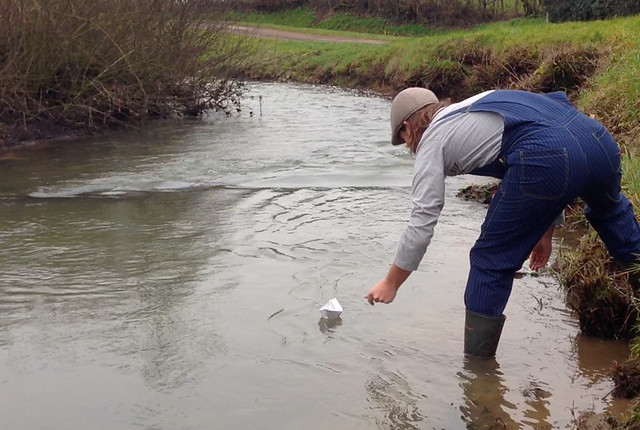 It’s not a coincidence that we used old magazines as material. Recycling is an essential part of our work. We shake our heads in disbelieve over the the amount of stuff we people create. And at the same absurd pace, we throw it all away again. There are mountains of trash everywhere, made of discarded and rejected stuff. We like to give these objects a second chance, not by covering up the landfill with earth and to turn it into a nice hilly park, but though upcycling and by making yesterday’s newspaper hot topic again. 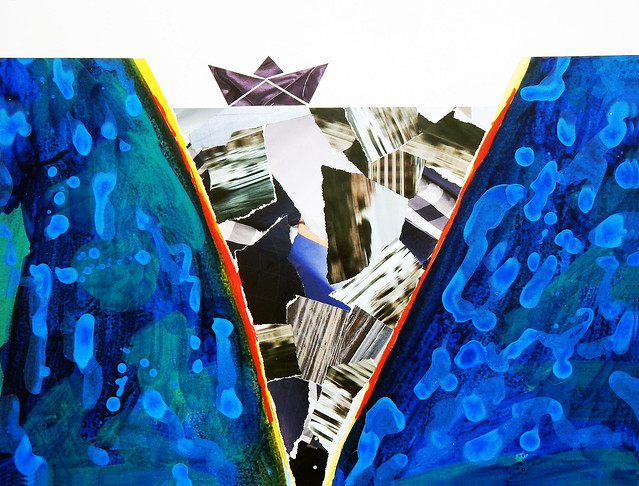 At this moment we’re researching the possibilities our waste has to offer in response to our changing environment. Our latest project in this era of economical and environmental crisis is the build of paper boats.
Due to the many different materials fused together in an average boat it’s very difficult, and therefor expensive to recycle them. Even wooden boats have thick coatings of polyester. And even then the only thing that can be made out of old polyester boats is asphalt. If you own a boat and you want to get rid of it, it’s easier to just abandon the boat, then to go to the troubles and the costs to bring it to the nearest recycling centre. The result are waterways in cities and harbours cluttered with half-sunken boats, littering the view and polluting the water.

In a time when resources are running low, combined with an undeniable environmental crisis, it could be useful to look at the possibilities of recycling. We were inspired by Hendrik Bulthuis (1892–1948), a barber from the Netherlands who came up with the luminous idea of building a boat for people who were less fortunate financially. Boats in those days were very expensive due to materials used, like long and straight wooden planks without any gnarls and knots. In his spare time Bulthuis constructed a boat in a totally unconventional way, and with shorter and cheaper pieces of wood.
Although the upper class laughed at his attempts to make a boat out of ‘firewood’, he continued anyway and in 1928 he launched his first boat, the BM. In the end the joke was on them, because nowadays you can’t imagine the Dutch waters without a BM.
His unconventional method to make a boat with limited means and cheap materials strengthened our believe that we could make a boat of paper. And since paper could be considered as a sort of wood, there’s a lot of cheap material fur us to recycle.

So we boldly set out to construct paper boats and try them out in the canal behind our studio. The first attempts were made entirely out of cardboard held together with tape.

Although they looked promising at first, unfortunately went down to Davey Jones Locker.
To strengthen the construction, we covered the model of the second paper boat with a layer of paper maché made of old newspapers, magazines and waterproof wood glue.
Unfortunately this version also sunk eventually, but it stayed afloat considerably longer than we’d expected. 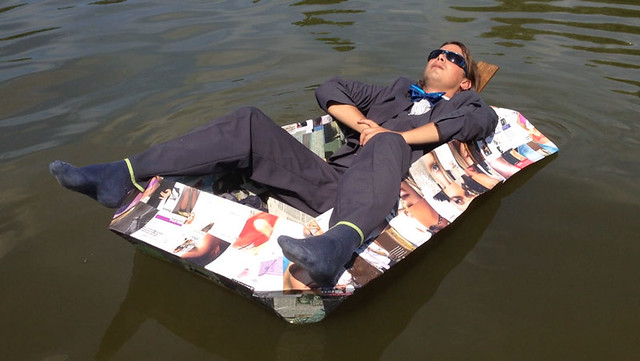 So we set out to build the next version, Paperboat 3, which was finally successful.
The entire construction of the Paperboat 3 is made of paper. The skeleton is a cardboard mesh, made from old cardboard boxes collected from supermarkets. The finish consists of layers paper maché, made of paper (newspapers, magazines) and waterproof wood-glue. 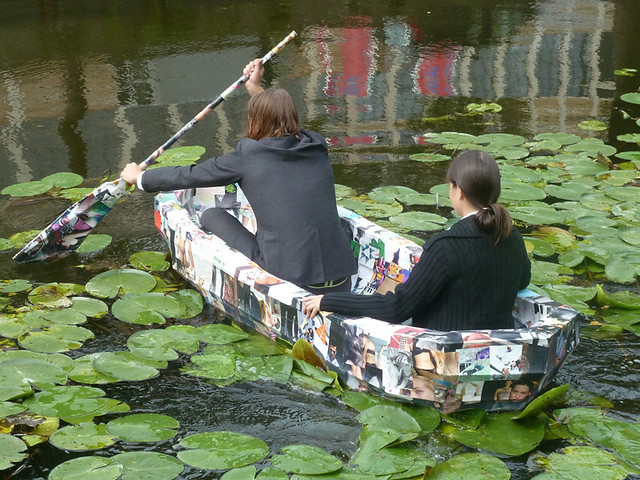 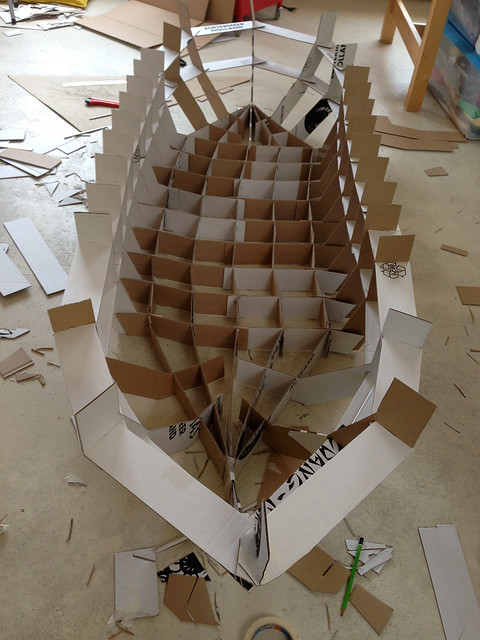 The success of Paperboat 3 inspired us to take our project a step further. Recyclable is a start, but we wanted to know if it would be possible to make a compostable boat. We embrace the the cradle-to-cradle theory of Michael Braungart and William McDonough, that eco-efficiency and traditional recycling is in fact down-cycling and will eventually cost more and cause more damage than rethinking our production methods based on the fact that in nature there is no such thing as waste. For if we use bio-degradable glue and paper for a boat, the whole boat can be used again to make new paper, and thus a new boat. Or a sunken boat could become nutrients when it decomposes.

So we went back to the drawing board and set out to experiment with different types of organic glue and old newspapers, because newspapers can be used as a substitute for brown matter in compost.
After trial and error we launched our paper canoe, the Paperboat 4 in July 2014. We’ve tested it in the waves on the beach in Scheveningen. And it survived the forces of nature, and salt water! Since all the components are organic and edible and the cardboard and newspapers were uncoated, this paper canoe is fully bio-degradable. You can toss on the compost heap after use! 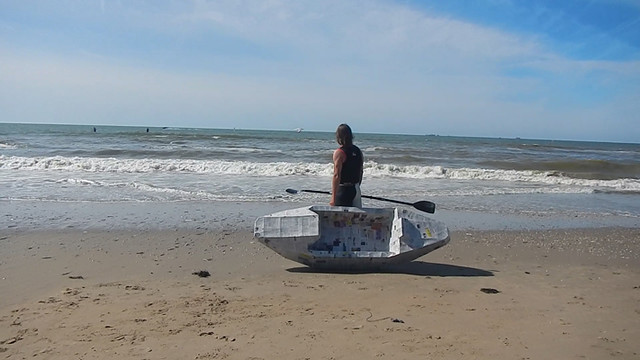 Our latest project was the build of a 5 meter long bio degradable paper boat (Paperboat 5) called ‘Binckie’. Binckie was made for the ‘I’M Binck Festival 2014’, a festival featuring the ‘Binckhorst’, a remarkable industrial area in The Hague. Circular economy is one of the main topics of the festival, so we used paper waste like cardboard boxes and newspapers from the Binckhorst for the build of our boat. We’ve built it at shipyard, ‘De Haas’ in the Binckhorst, amidst all his bigger brothers. October 11th we launched ‘Binckie’ during the ‘I’M Binck Festival’
Binckie served as a ferry transporting passengers for a whole month during the festival and could seat up to 6 persons, more than 500kg. 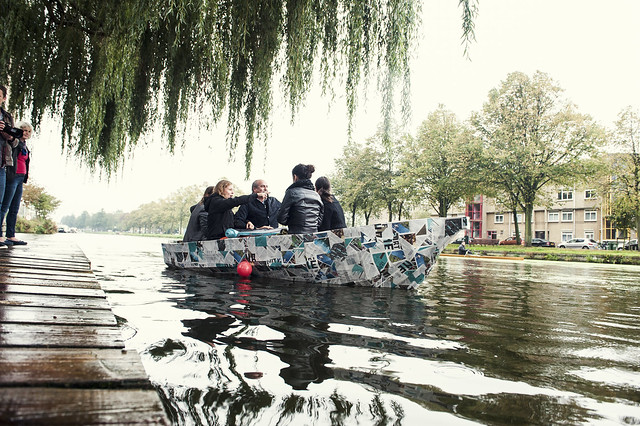 So what’s next? A paper sailboat?
We envision the people of urban environments to step out of the rat-race for a moment and spend a day on the water with a Paperboat and enjoy the beauty of nature, just like the BM in the past gave more people the opportunity to go boating. And afterwards they can just throw away the paper boat with the other waste paper.
Since we want to offer everyone the opportunity to have fun with a Paperboat, and do something for their environment at the same time, we’ve made DIY-kits, to make your own disposable paper boat. 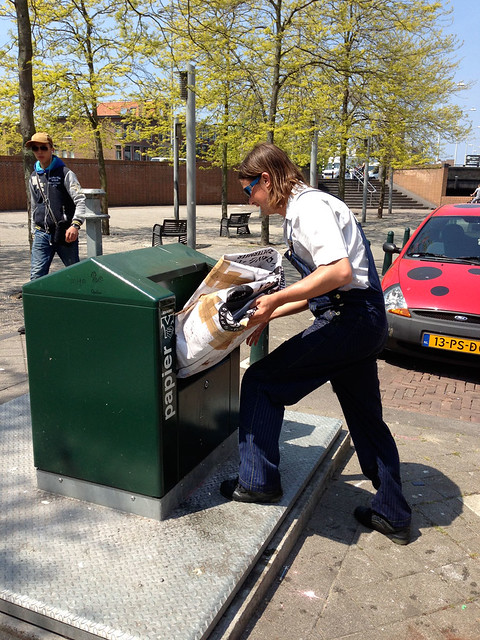 Our aim for our Paperboat project is to create awareness for our environmental situation. We hope that people will reconsider the worth of what they trow away, where they dispose it an what effect it has on their environment in a playful and inspiring manner. 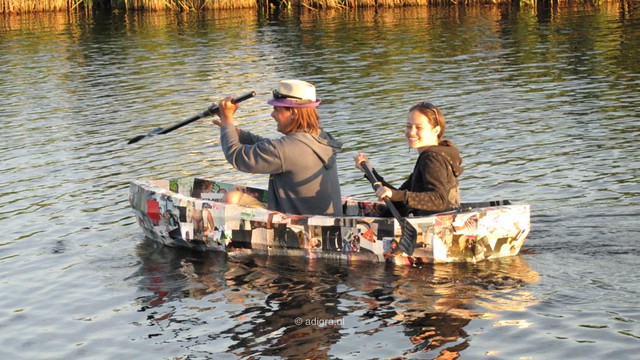